Vadim Murin
Green changed to white, emerald to opal, nothing was changed 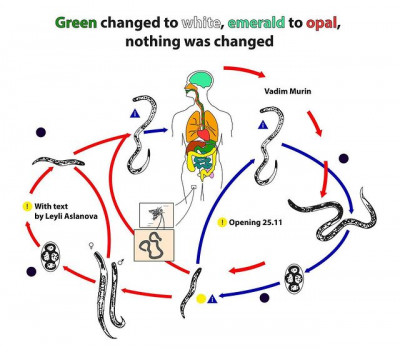 Know that this hard fight of the flesh was allowed to you so that you might not become proud in your mind, as if you had overcome your passions by your penances and feats, so that you might not perish by becoming proud.
Abba Isidore, Lives of the Saints as Composed by St. Demetrius of Rostov
August:281

Murin
Christian history knows of Moses Murin, to whom it is customary to pray for protection against binge drinking. Moses Murin was black and Ethiopian. He was also an outlaw, and was tempted by demons again and again. He spent a long life in sin until he took the path of monastic service. Perhaps he was a distant ancestor of the artist Vadim Murin. Vadim Murin himself is swarthy and testifies that he is of Roma descent and his blood remembers Siberia.

Black Smallpox
In 1959-1960, there was an outbreak of black smallpox in the USSR2. Rumor has it that a famous Moscow poster artist cheated with a vaccination before his two-week trip to India, where he attended the burning of a Brahman who died of black smallpox. Coughing, the famous artist returned to Moscow, which was soon closed for quarantine. Mass vaccination was announced in the region, and within 19 days of the organized struggle, the spread of the virus was stopped.
In 1971, the infant Vadim Murin was completely covered with black blisters after smallpox vaccination. In his case, the medics despaired. The future artist was saved by a miracle and, as he himself says, a village healer. Fortunately for him, mankind managed to obliterate the smallpox virus right after the described events.

Immortality
At the age of seven, the future artist Vadim Murin could not believe in death, and the idea of his own immortality remained ingrained into his consciousness.

School years
Artist Vadim Murin was brought up in an environment of frequent hand-to-hand combat. It did not break his spirit, but formed a strong aversion to any physical violence. As a child, Vadim Murin loved joking and pranks more than anything else, so teachers punished him in a non-violent form, for which he was violently smacked around at home.

The artist's childhood took place in a repulsively marginal dimension. He had no inclination for fine art, except that for the general amusement of his classmates he diligently copied caricatures from the magazine КРОКОДИЛ. Vadim Murin wanted to get a culinary education, but a bad recommendation from school prevented it. In those years of stagnation, studying in a vocational school often came hand in hand with an association with prison. Avoiding such a prospect, Vadim Murin enrolled at the Mitrofan Borisovich Grekov Art School at the second attempt. The artist Avdei Stepanovich Ter-Oganyan3 had been kicked out of this school for aesthetic incompatibility years earlier, although the school's website proudly lists him, along with the artist Valery Koshlyakov4, as one of the graduates whose works are on display at the Tretyakov Gallery.

After a year of study, the artist Vadim Murin managed to get their group to be taught by the artist Alexander Lishnevsky, not by the teacher, with whom Murin himself did not experience any ill relations, but the rest of the group suffered tremendously. The teacher, who boasted of banishing the painter Avdei Ter-Oganyan, angered everyone with his unwillingness to teach academic drawing and the imposition of modernism. In short, he did not forgive Murin for having replaced his teacher and even spat at him once.

A new instructor, Alexander Lishnevsky, immediately set things right in the group, and everyone learned to draw well. And this despite the fact that in 1991 he might have been worried about the theft of more than a hundred of his works from the joint project Luxury Objects with other Rostov artists Vadim Morozov and Sasha Chernov. At some point some european art dealers took more than seven hundred works of artists 5 to the Netherlands and disappeared shortly after. The great Alexander Lishnevsky was not crushed by the situation; he continued to create new artworks, teach and became one of the first curators of contemporary art exhibitions in Rostov-on-Don, and in 2010, he even served as commissioner of the first and only South Russian Biennial of Contemporary Art.

Also during his student years the artist Vadim Murin managed to get married, get addicted to drinking and become a father for the first time.

Illumination
Often pseudo-experts of the artist Vadim Murin boast of claims that his paintings are painted in white paint because Murin did not want to spend money on paint. But in the 1990s, Murin had plenty of government-issued materials, despite the poverty prevailing around him and his own poverty. Even today he does not shrink the production budget for the realization of his ideas.

The background of the white paintings remains the following: one day in his early drinking period, after drinking a whole bottle of vodka, the artist Vadim Murin had an illumination of consciousness. As Murin himself testifies, A flash - a beam of light - sprawled all over my head. And I had this idea - to paint white on white! To paint angels eating meat and associate angelic figures with physiological motives. There is something angelic in man. But there is also an animal in man - devouring and defecating. In this denial and disguise of the carnal attributes is man's entire hypocrisy.

Rebirthing
At the beginning of the noughties, artist Vadim Murin went through a course of hypnotherapy to aid his ongoing battle with alcoholism. In order to consolidate the effect of hypnosis, he decided to free himself from the birth trauma with the help of the breathing psycho-technique. To the uninitiated, rebreathing, or rebirth, looks like a crazy act where a person, after hyperventilating his lungs, crawls between the legs of ten imitating birth canal people who periodically squeeze him, as if the mother's muscles were in labor.

Such practices occur in the biography of artist Vadim Murin because of his sustained interest in man and the soul, and hence in transpersonal psychology and Jungian theory, whose passages are infused with his mythological paintings of various years.

Sur Vive [You Must Live]
When painter Vadim Murin met painter Nikolai Konstantinov, who was 10 years older than him, they simply became friends. Nikolai Konstantinov, like Ter-Oganyan and Koshlyakov, was also once a member of the Art or Death Fellowship and even tried to live with them in Moscow, but eventually returned to Rostov-on-Don because he was true to painting and did not want to be a conceptual ding-dong.

Later they were joined by a very young artist, Sergei Sapozhnikov, who had already moved away from graffiti and was breaking into painting.

In 2006, the three of them would prepare for the exhibition Survive at the Museum of Modern Fine Arts on Dmitrovskaya. Shortly before the vernissage artist Nikolai

Although artist Nikolai Konstantinov's death was sudden, he had long feared it. His comrades in Art or Death Vasily Slepchenko and Sergey Timofeev died young, which gave rise to superstitious speculation about the unholy name of the association. Knowing his friend's fears and wanting to help him overcome them, painter Vadim Murin offered artist Nikolai Konstantinov to cheat death, and so appeared the painting Artist Kolya Konstantinov pretends he is dead (2002).

In 2008, this painting opened the exhibition About the mortal in art in M Gallery. The exhibition was put together by the artist Sergei Sapozhnikov in memory of the artist Nikolai Konstantinov, and many Russian artists participated in it.

Moscow
Death of a friend shook the artist Vadim Murin, and an apparent stagnation in his work took place. Personal circumstances led him to Moscow in 2008. The question of a career in the capital city did not interest him, but he attended exhibitions of contemporary art with interest and noted to himself that his art was moving somewhere in a weird direction.

Return of the fire
Artist Vadim Murin associated his crisis with the fact that his creative fire, along with his lighter, was buried in the grave of the artist Nikolai Konstantinov. He once had a dream in Moscow in which a hooded man threw a candle at him. Vadim Murin later identifies the stranger in the dream as Konstantinov, who returned the fire to him. Based on the dream, artist Vadim Murin got the idea to create paintings with candle flames, so a series of paintings made in the technique of fiumage happened.

In 2011, the artist Vadim Murin returned to Rostov-on-Don, where he actively began working on his own projects, acting as a curator, author of lectures about Rostov contemporary art, organizer of the School of Contemporary Art and the creative association Face Group. In 2018, Makaronka Art Centre presented his solo exhibition, curated by Svetlana Baskova, complete with a newly published monograph 7.

A return to white
Artist Vadim Murin is interested in creating art utilizing mythological and religious context, but the Russian political conditions of the first half of the 2010s has led artist Vadim Murin to the idea of creating realistic art that would be both abstract and deceptively meaningless. He became fascinated by the observation of floating blurs in his eyes 8 - his own physiological pathology that prevented him from looking into the outside world. Thus began his eye series in 2015, on which he continues to work to the present time.

A note from the author

At times I want to splash brightly with the statement that it is better not to get acquainted with artists whose work you love. And this happened to me when I wanted to distance myself from the artist Vadim Murin, because I could not fit him into my ideas of normality. Fortunately, that did not happen, and I was lucky to recognize the human fire in him - the intellectual, kind, reliable, merciful and honest personality of the artist Vadim Murin. In 2014, I proclaimed the artist Vadim Murin one of the fathers of the art scene in Rostov-on-Don, and I remain convinced of this. I admit that I am corrupted by the artist Vadim Murin's inexhaustible influence on my work as an artist. I report that I receive much of his creative support in the realization of my curatorial practice. I am grateful that the example of the artist Vadim Murin always brings back to me a romantic and even outsider attitude to art, in which one can feel alive, free and creating. Thank you, artist Vadim Murin! Bless you!